Berlin, GERMANY – the capital of Germany and second most populous city in the European Union. Just 28 years ago, the city was divided into West and East Berlin (crazy to think I was born just 4 days before the fall of the Berlin Wall), so we decided this city deserved more time for us to explore given it’s recent history…and rebirth. 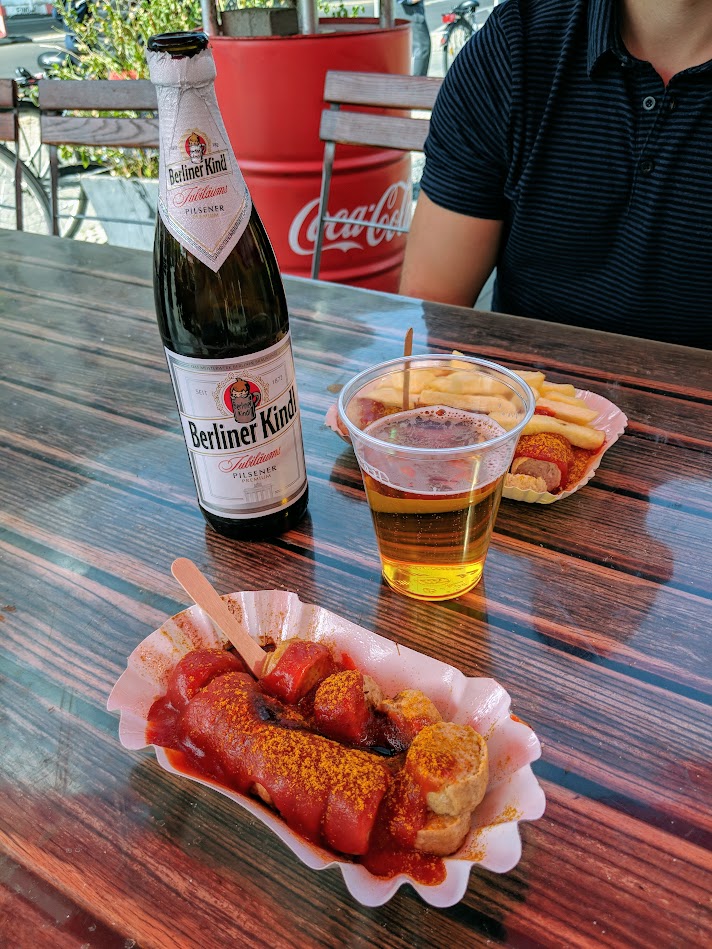 The name Berlin likely comes from a Slavic source, meaning “swamp,” in reference to the old city’s location on low, marshy ground along the River Spree.

Prenzlauer Berg – one of Berlin’s most charming residential neighborhoods, lined with  leafy green trees, cafes, historic buildings and indie boutiques. It provides a lively and trendy atmosphere – perfect for exploring on foot. This area is also known to be popular with young parents, so don’t be surprised if you find babies in a biergarten.

Mitte – meaning “middle” in German, this is the center of the city. Here you’ll find all the action: historical landmarks, shopping, restaurants, art, and culture. Hello, history!

We stayed in Wedding due to our late Airbnb booking, and while it wasn’t our first choice, the metro allowed us to get to any part of the city within 20 minutes.  We were  able to experience the international community in the area, finding surprises like Turkish delights and tea every afternoon during our walk home.

Hey Berlin, you’re pretty cool and that’s not just because you can drink beer in the street…legally. You’re also philanthropic because it it encouraged to leave that empty beer bottle next to the trashcan so they can be collected by those searching for them. That way, the “recycler” doesn’t have to reach into the dirty trashcan and there’s no broken glass.

Sandman’s Free Walking Tour – we started our adventure with a 3 hour walking tour of the city to set our bearings.  Make reservations online. English and Spanish tours available.

Pro Tip: Stay back at the end of the tour and ask for local restaurant and bar recommendations to finalize your itinerary. Check out Resident Advisor to see what events are happening around the city.

Berlin Wall – throughout the city you’ll find where the former Berlin Wall stood, marked by a double row of cobblestones. Traces of the wall can still be seen at East Side Gallery,  Berlin Wall Memorial in Bernauer Strasse, the Berlin-Hohenschönhausen Memorial, a former Stasi remand prison, and Mauerpark. We viewed the wall from just outside the Topography of Terror where we were able to read from a timeline of horrific events. 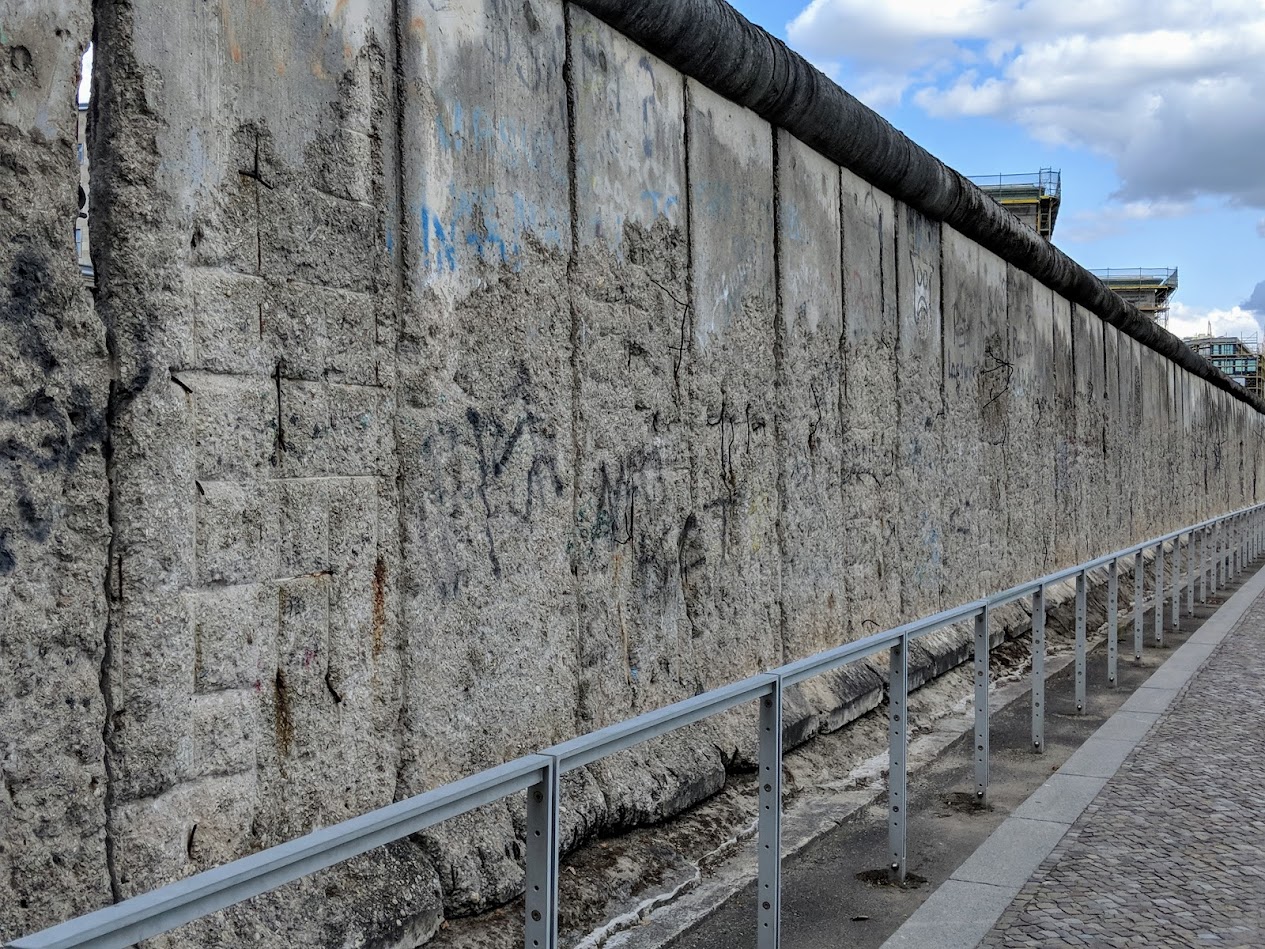 Brandenberg Gate – did you know Berlin’s full name was Berlin – Brandenberg, a major principality of the Holy Roman Empire? During the Cold War, this gate was used as a landmark to divide East and West Berlin. When Germany was reunified following the fall of the Berlin in 1989, Brandenburg Gate reinvented itself into the New Berlin’s symbol of unity.

The Quadriga (the sculpture of the horse-drawn chariot on the top) was stolen by Napoleon’s soldiers and taken back to France as a victory trophy in 1806. Once Napoleon was defeated, the Quadriga was returned to Berlin. Checkpoint Charlie – our guide named this site the Disney World of Berlin because  unfortunately there is nothing left to see. It was a former border crossing from the American sector (West Berlin) into the Soviet Union sector (East Berlin).

Warning: Do not have your passport stamped with the former East Germany stamp at Checkpoint Charlie. This is considered vandalism to a United States Government document. Remember, you do not own your passport, the government does. So, it’s best to not deface government property.

Topography of Terror – located on the former site of the Gestapo and Secret Service headquarters, now lies the museum with photographs and documents that illustrate the history from the time the Nazis took power until the end of the war. Free guided tour of the Permanent Collection in English Sundays at 3:30pm.

East Side Gallery – this open-air art gallery on the banks of the Spree is the longest continuous section of the Berlin Wall still in existence. The Socialist Fraternal Kiss is one of the most popular murals you can see, but there is much more art to be admired that tells of Berlin’s recent history.

Reichstag Building – visit the dome of this governmental building to get impressive views of Berlin. Advance registration is required. Today this building houses the German Parliament so check to see if the dome is accepting visitors during your visit.

Memorial to the Murdered Jews of Europe – memorial to the Jewish victims of the Holocaust in the center of  the city. The 2,711 concrete slabs are designed to produce an uneasy and confusing atmosphere. The structure aims to represent a supposedly ordered system that has lost touch with human reason.

As you walk through the columns, you see other people flash by and then disappear or faint voices and then silence. The architect has left this memorial open to interpretation, but many say the columns represent coffins – all in different shapes and sizes.

DDR Museum – interactive museum that shows visitors what life was like in East Germany. Buy tickets online and you’ll skip the line and receive a discount.

Soccer anyone? The football teams of the two Germanys met only once in the World Cup in 1974. The East German team won that game, but the West Germans went on to win the entire tournament.

Mauer Park – check out the flea market on Sundays with local vendors and even karaoke starting at 3pm.

Small House of Wonder – perfect for breakfast with the most Instagram worthy entrance! Arrive early between 9am and 10am to not only avoid a wait, but the Eggs Benedict dish is limited…and you’ll understand why (we went back twice). Cash only!

Katz Orange – excellent dinner with trendy music and fabulous cocktails. We ordered the lamb for two, corn salad, and clafoutis dessert. For cocktails, you can’t go wrong with the Red Pepper & Royal Panamerica with pisco and mezcal. Reservations recommended.

Commonground – connected to the Circus Hotel, you can find both curious tourists and locals on their laptop here.  The brunch menu is fresh, tasty, and plentiful. I recommend the zucchini fritters and baba ganoush salad.

Ottenthal Restaurant –  best schnitzel during our time in Berlin! We split the tasting menu to try all the essentials – pumpkin cream soup, schnitzel, and apple strudel. Just the one menu was enough for us to share!

Curry Wurst = German fast food consisting of a pork sausage typically cut into slices and seasoned with curry ketchup, a sauce based on spiced ketchup, and topped with curry powder.

Don Kebab – YUM! Great pit stop after a night out at Kulturbrauerei before returning home at 5am.

The Standard – PSA announcement, arrive before they run out of dough! Great hangout to share a pizza and bottle of wine (look for the bottle of Tapps red wine on the menu – only 12 euro!)

Pizza Nostra – casual pizzeria run by a group of Italians in Prenzlauer Berg. Picnic tables outside to enjoy your pizza (or two!) and people watch.

Prater Garden – biergarten nestled in the heart of Mitte. Great place to rest your feet while you plan out the rest of your day. Cash only!

You can find more authentic Turkish foods at the Turkish Market in Kreuzberg (open Tuesday to Friday),  Hakiki Stand and Ugur Imbiss for doner kebabs in Wedding. Soda – come here to dance! Located inside the Kulturbrauerei this club offers three different dance floors: techno, R&B, and European Pop. The R&B floor was our favorite – and even better, the Germans classify Reggaeton as R&B so we danced all night to American Rap, Reaggeaton, and German Rap.

Monkey Bar at Bikini Hotel 25 Hours – very popular bar in Charlottenburg, so expect a wait to get in. Great cocktails, relaxed environment, and good service.

ProTip: Be patient to snag a seat outside – people usually have 2-3 cocktails here and move to another bar- drinks are a little pricey. Great place to start or end the night.

Scotch & Soda – great cocktails in Prenzlauer Berg! We like to sit at the bar to watch all the magic happen.

Maxxim – stumbled upon this police station converted nightclub after leaving Monkey Bar at Bikini Hotel 25 Hours in Charlottenburg. It was a Monday so we didn’t expect the scene to be too lively, but ended up staying much later because the music was so good.  Spinning House, R&B, Reggaeton, and Electro.

Berghain – this is one of the most exclusive clubs in Europe. The door policy is strict, so don’t try to test it. Here’s some advice if you want to increase your chances of getting in:

1. Know who is playing – they don’t mind tourists, but they want to know you respect their culture enough to know which DJs are spinning that night. Trust me, the bouncer will ask.

2. Dress code – leave your best outfit at home and WEAR BLACK. Like all black. People try hard to dress down for this club, where the grungier the better. Did I mention…wear all black.

3. No speaking in line. Not only because you may not speak German, but because you want to act like you belong there. Stay silent and cool.

4. And don’t even think about pulling your phone out. There is a STRICT no phone policy inside.

So did I do my homework in advance or was this a learning experience? Who thinks Dmitriy and I got in?

Tresor – underground multi-story techno club located in an abandoned power plant. See Berghain for tips to get in.

Klunkerkranich – rooftop bar with the best view of Berlin. Come for sunset! Finding  it can be tricky – look for the Shopping Hall parking garage entrance, take the elevator up to the top floor, and walk to the top of the parking garage to find this open air bar. 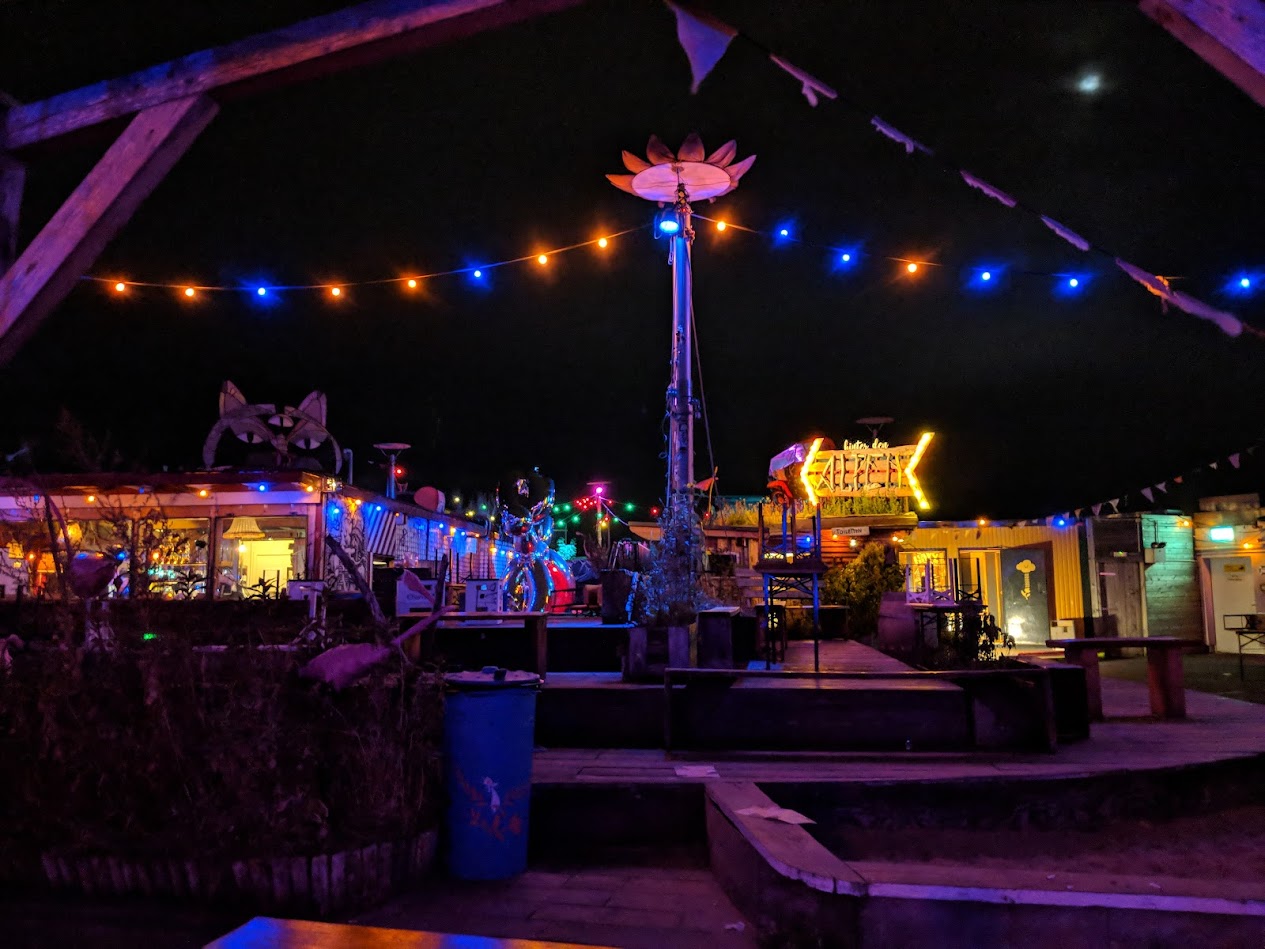 And to answer your question,  we didn’t get into Berghain. We quickly learned that a collared shirt and a blush leather jacket gets an instant rejection. We tested the door policy and it’s no joke.

We still love you, Berlin!

We’re Brittany and Dmitriy – a Latina at heart and a Manchester United obsessed Ukrainian living in the U.S. who fien for travel. After helping plan several trips for our family and friends, we have decided to share our journey through the world – one country at a time.

Tarmacs and Tequila combines a life of travel and living on the runway (hence: Tarmacs) with our favorite spirit (Tequila, of course). We sip, celebrate, and often book spontaneous trips thanks to this precious Mexican liquid gold.